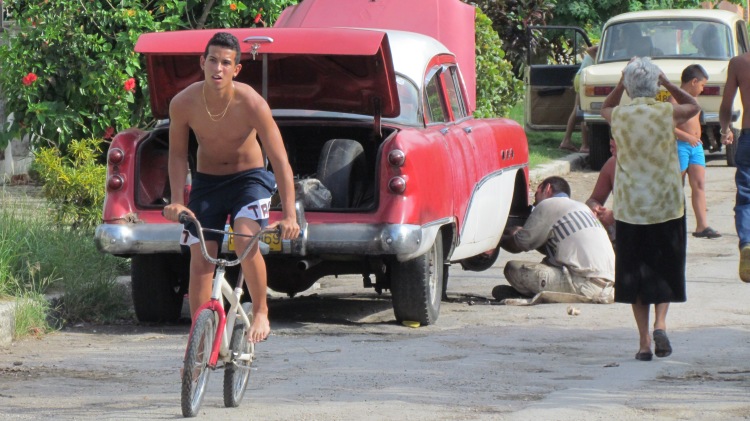 I lied to my father, told him we were on Cape Cod when, in fact, we were bouncing around the battered streets of Havana in our friend José’s 1953 Chevrolet Deluxe, the one with the new Toyota engine but no working gauges on the dash. Nothing about Cuba is easy. Not the politics, not the crazy convertible peso and definitely not the getting there. But as a Cuban-American trying to connect with the last twigs of our family tree in Havana, the biggest obstacle I faced was my father’s disapproval.

My working-class parents originally supported the revolution — my mother even sold bonds and collected medicine for the rebels. But after it triumphed, politics became the center of life, and the new society demanded daily doses of vigilantism, denunciations and repression of the self. My parents muzzled themselves, applied for permission to leave the country, waited years for it to come, and finally, in 1967, immigrated to the United States.

Now my 80-year-old father, like many older exiles, vehemently criticizes Cuban-Americans who return. Papi sees each dollar, bar of soap and laser printer we bring back to our families as power flowing into the Castro brothers’ hands. When I told him I was considering a trip to Cuba, he fought hard to dissuade me, calling me daily from his home in New Hampshire. “Don’t you see you’re keeping those bastards in power? Cuban-Americans threw $4 billion at that economy last year! You’re legitimizing their repression! After all we did to get you out, now you want to go back?”

I did. Since I’d left as a 6-year-old, I’d been back only once, in 1999. I wanted to know my cousins. And now that the Obama administration had loosened some travel restrictions, I wanted my husband and son to see where I was from.

For months, Papi and I argued on the phone, over kitchen tables, side by side in cars. When the Cuban P-11 visa I’d applied for last April finally arrived in August, I cooked up a lie to spare him — and myself — some pain. If Papi asked for us, I told the 27 members of our family, say we’re on Cape Cod, out of cellphone range.

We flew to Havana on one of the charters that brings hundreds of thousands of my cohort to the island every year. Immediately, my cousin Patricia and I fell into the kind of five-day-long conversation we’d spun on my last trip. My Jewish husband and son folded into her buzzing household like natives; in no time they were shirtless in the 95-degree heat, following the other men out to the front porch to sip café from tiny cups and listen to the chants of street vendors selling sunglasses, “with bifocals or without!” I stayed inside with Patricia’s kids, facing the fan, building a model of the solar system with Diego and sewing a princess doll for Verónica. Embargo-busting love was in the air.

On our last afternoon, we drove to my old barrio on the outskirts of Havana. Juanelo was never much to look at, but now the houses seemed to lean more than stand, and moldering stucco walls showed their bricks like bones. But the neighbors streamed out of their houses and the kissing began. They fed us stories about my grandparents, aunts and uncles, about my father playing baseball and my mother teaching children to read. The old women smelled of soap and wore clean cotton batas de casa. Holding my hand, Nena, 90 years old, told her daughter to run and get the pictures. The photos showed our family in New Hampshire over the years, photos my grandmother, aunt or mother had sent years ago.

Nena reminded me of an old woman I met at a market on my last trip to Cuba. She was selling necklaces of beans and seeds, coconut shell bracelets, trinkets. We were chatting when she stopped suddenly. “You’re from over there! You didn’t forget us! Take anything from my table. My gift. But don’t forget us! You see, when the old women there die, and the old women here die, it all ends.”

Of course, nothing will make up for the loss of that generation, but I am more optimistic about the future. As the older people on both sides of the Florida Straits die, so, too, will the bitter passions that helped fuel more than 60 years of stalemate between Cuba and the United States. Cuban-Americans my age are generally more politically flexible than our parents, and our peers in Cuba, despite the state’s view of people like me as traitors who abandoned their country, seem curious and open to our return. And just last week, the Cuban government announced that it would change the law on exit visas, making it easier for Cubans to go back and forth between the island and America.

Nonetheless, many of my father’s generation will die still waiting for their country to truly change. As their heirs, we face a choice: to focus on score-settling for our parents or to reconnect with and rebuild the Cuba they cherished.

I called my father when we landed in Miami, hoping the 1,300 miles between us might dull the reverb on the line when he heard where we’d really been. Instead, I heard a sigh. “Mija,” he said. “Thank you. Really … Who did you see?” The wonder in his voice soothed me, washed me clean. Maybe it wasn’t too late for my father, or for Cuba. I could share my treasures with him now, the stories, photos and messages from all my new cousins and the old women who would not forget us.